So Queen Elizabeth II recently made the switch to wearing faux fur (okay, kinda late, but better late than never) and it kind of got me thinking about the ethical side of things. Most of us have established that real fur is a big ‘no-no’ in the 21st century, but should faux fur have any real place in the fashion world either? To help me answer this question, I put together a look featuring some of my faux fur faves, and got to grips weighing up the pros and cons in the fabulously furry debate. 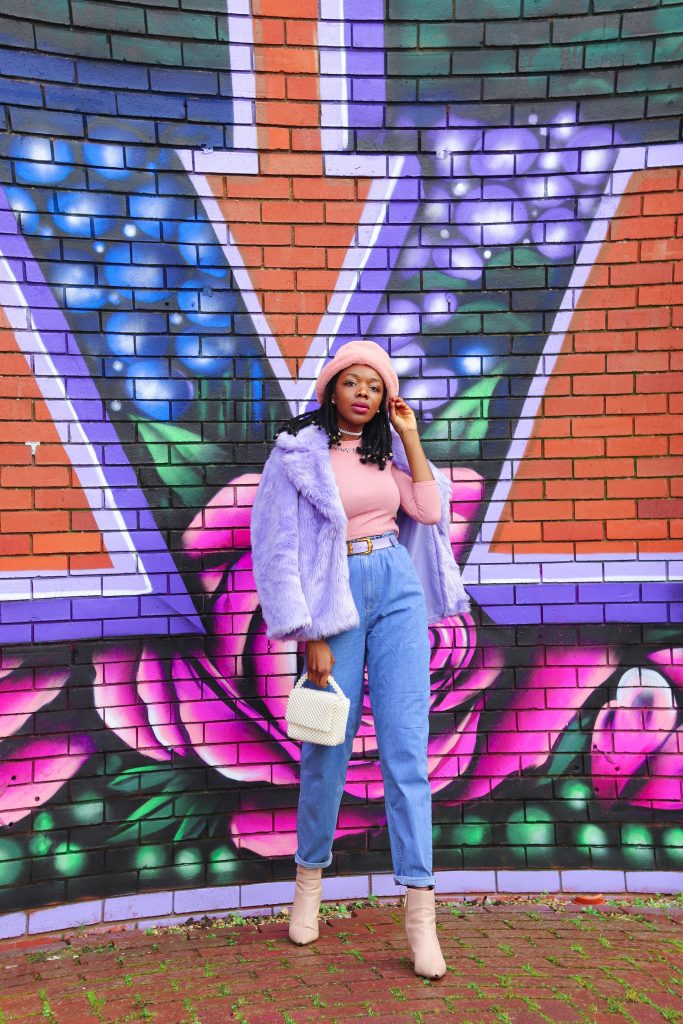 It’s no hidden secret that I’m a huge faux fur fan; as someone who’s always cold, there’s nothing not to love about snuggly fabrics… especially when they’re super soft and come in pretty pastel hues to boot. But also being an ethical veggie, I must admit I sometimes feel a little conflicted about wearing fur… even if it’s not the real deal. I’ve heard people make the argument that eating meat substitutes which look like meat is hypocritical because ‘if you’re against animal suffering, shouldn’t you be against anything that *looks* like a product derived from the suffering of animals?’ Couldn’t you also argue the same thing about wearing faux fur? 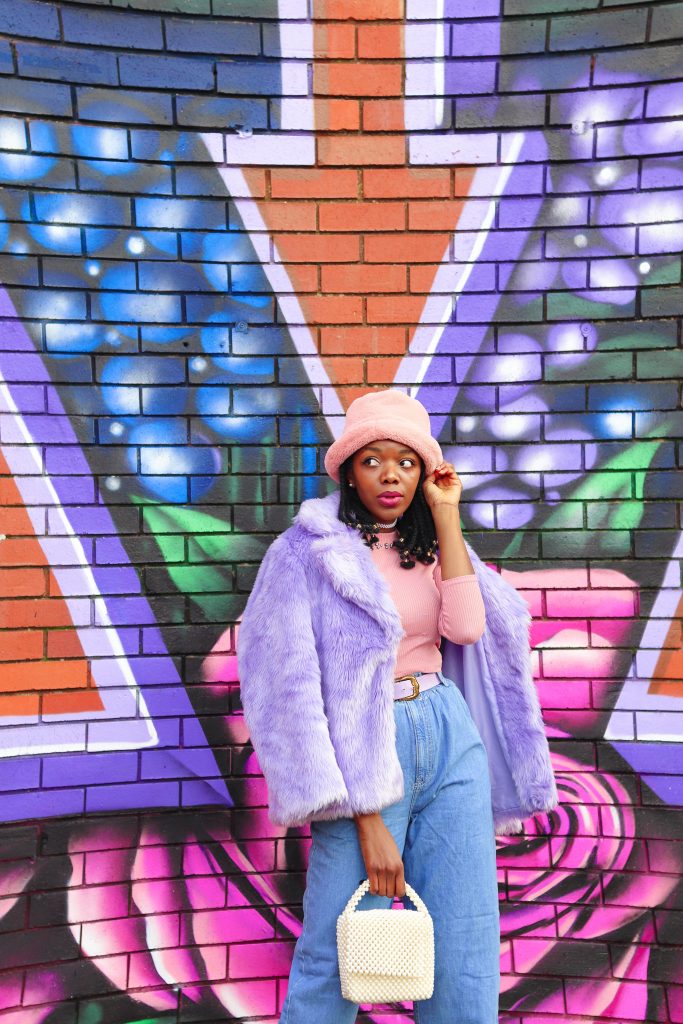 That contemplative look: ‘but shouldn’t you be against anything that resembles animal suffering?’

I totally get this argument, but here’s the thing: there are very few people who stopped eating meat because one day they suddenly woke up and thought, ‘ya know what? I really hate KFC. It looks utterly disgusting, and the taste? Vomit-worthy’. I can’t speak for anyone else, but I went veggie because even though I liked some meaty munchies (tbh I’m more pressed about the fact that I can no longer eat Haribo than anything else), I couldn’t justify causing another being’s suffering simply to tantalise my tastebuds. So how is this relevant, I hear you cry? Well, what I’m saying is, faux fur allows you to enjoy the fabness and cosiness of fur… without it meaning that there’s one less furry face on planet earth. And the way I see it, isn’t that actually… a good thing? 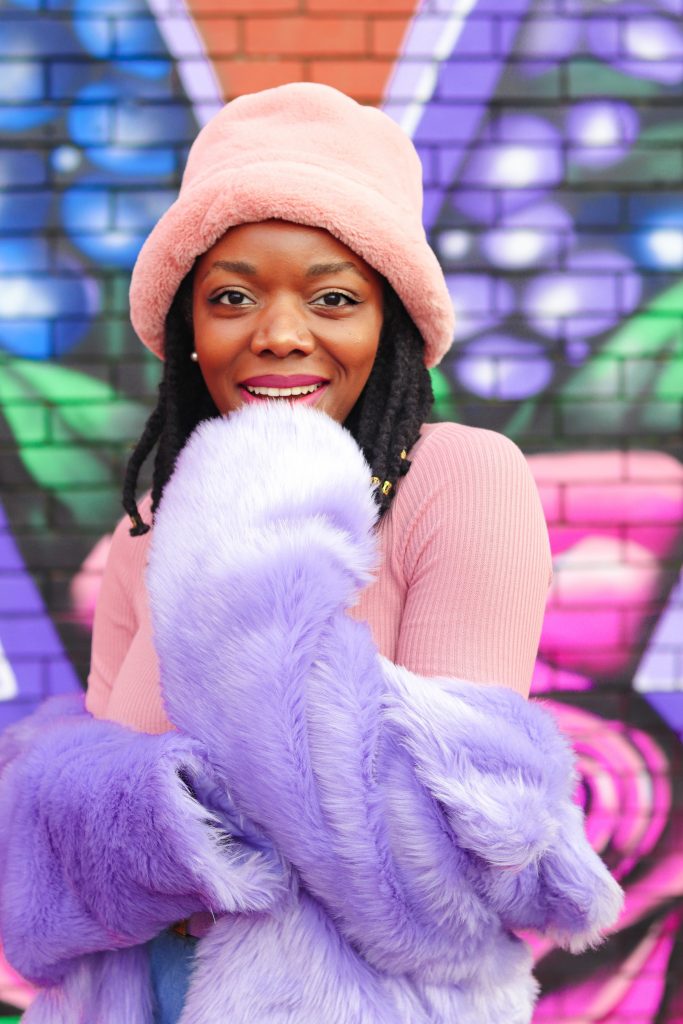 That smile when you find out that no furry creatures were harmed in the making of your outfit.

Faux fur con 2: Well, the animal’s dead anyway… (so not using all of it is kind of a waste)

This is one argument I’ve heard people use re. manufacturing leather goods and in some ways, I actually think it’s a pretty good one. Think about it: If an animal’s being killed for its meat and everyone’s cool with it (well, most people anyway), then why all of a sudden do we get all up in arms when it comes to fur? From an ethical standpoint, I feel like not being okay with people eating meat, but being happy to wear fur is kind of… well, shady. From an economic standpoint though, producing animal-derived goods costs enough money/effort to begin with, so would it really make sense to suddenly start throwing away the skin because it’s a ‘superfical’ by-product’? I meam, if I were a cow, it would at least be some consolation if, when I reached cow heaven, I could swan around telling everyone that even though yes, part of me was made into a burger, at least my skin was stretched into a few pairs of lovely Louboutin heels… just kidding. 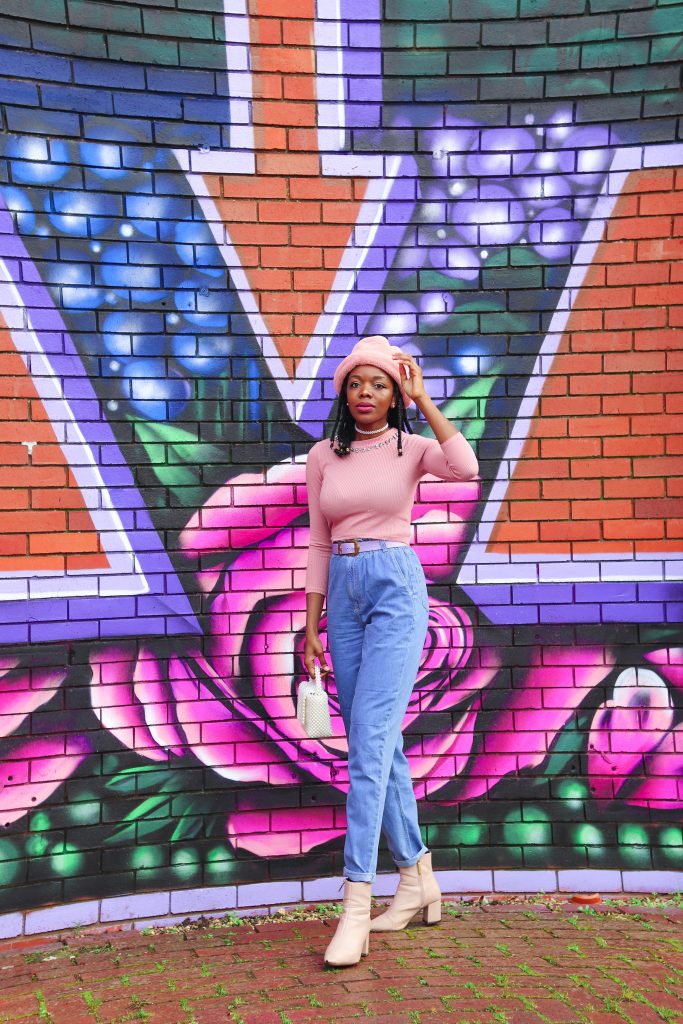 Cows (*Gathered in a circle in cow heaven*): now who here can say their skin was made into a pair of designer shoes? Cow 1: *Flips hair. Raises hand* Yes, yes the rumours are true. I am now a pair of Louboutins.

Faux fur pro 2: There’s no need to breed animals for fur in the first place…

While the ‘well, it’s already dead anyway’ argument does hold some weight when we’re discussing leather, when it’s fur that’s under the spotlight, it’s actually kind of flawed. The animals most commonly used for fur are rabbits at the ‘affordable’ end of the scale, and foxes, mink and raccoons at the higher end. Unlike livestock, these aren’t animals which are frequently used in the meat industry, which means that fur isn’t a by-product of meat: there are fur farms where animals are specifically bred for the purpose of being someone’s next stole, coat, or glove cuff. (Yikes). The good thing about faux fur is, it completely eliminates the need (or… desire?) to breed animals for fur, meaning there’s no real waste being made ’cause you’re only creating what you need: soft, fluffy, cosy fabric, plus, simply put, nothing dies. Hooray. 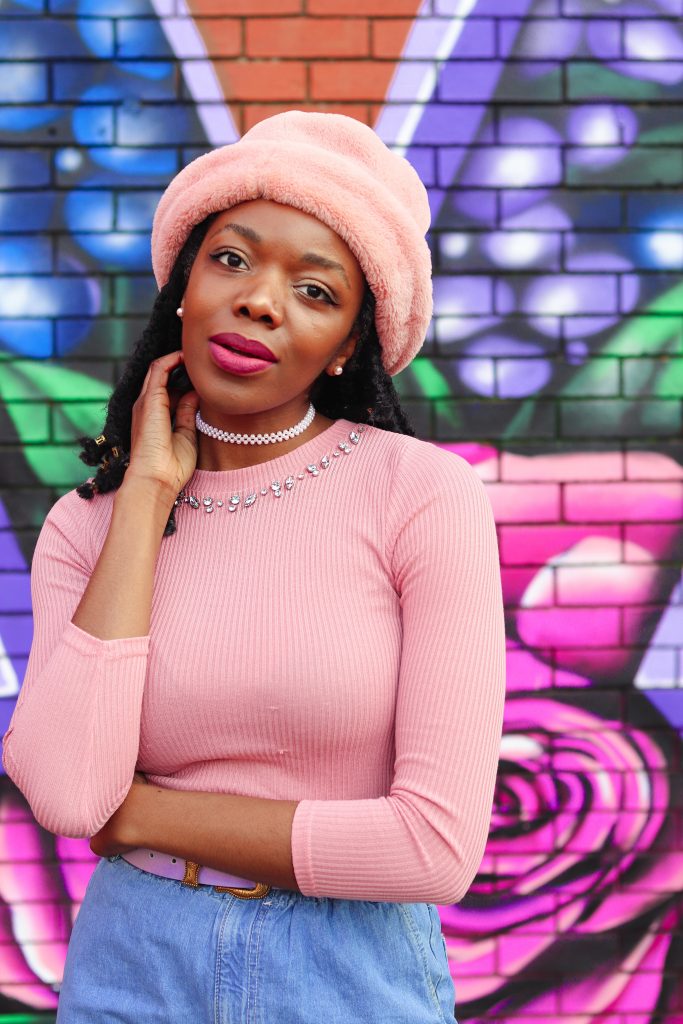 Just what you need: Cute 90’s vibes, and no waste

I’ve recently started trying to be more conscious with fashion and sustainability, so I actually feel like there’s a real point to be made here. The thing about faux fur is, unlike it’s au naturel cousin, it generally consists of man-made fibres like polyester, which aren’t biodegradable. They’re also produced entirely from scratch, meaning more CO2 emissions, both during the manufacturing process and towards the end of their life cycle ’cause it’s pretty hard to recycle synthetic fibres… Hmmmm. It’s debateable whether the gain of saving animals’ lives outweighs the massive cost to the environment- I mean, should we even be wearing fur– in any form– at all? 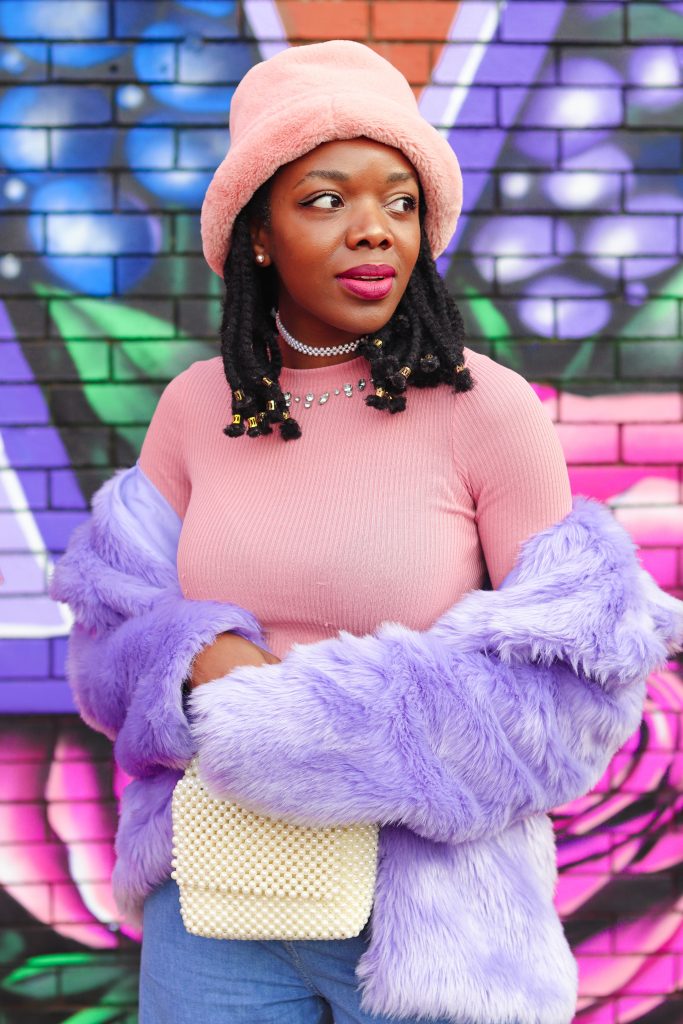 Gazing off into the distance wondering whether it should really be the end of the line for faux fur. *Sniffles*

CO2 emissions and non-biodegradability aside, you could argue that faux fur is still easier on the environment than real fur. Breeding animals for fur does have some massive environmental impacts like air pollution from burning animals’ carcasses (source as in previous point), not to mention all the land and resources used to feed and house animals which are bred for their coats. I haven’t got specific stats for you (this post is already long enough as it is), but I can’t help feeling like we could really make better use of these resources and (and reduce some forms of pollution) if the animals weren’t bred for fur ’cause it’s kinda hard to take up space and create pollution when you don’t even exist, ya know? That being said, I do think myself and my fellow faux fur lovers do have some responsibility to buy sustainably. How? Try going for higher quality, rather than fast fashion pieces which are likely to fall apart and not throwing stuff away just ’cause it’s ‘out of style’. Since there are already some environmentally friendly faux leathers out there, I wonder whether it’s also possible to create faux fur fibres which follow suit? It’s definitely worth a shot. 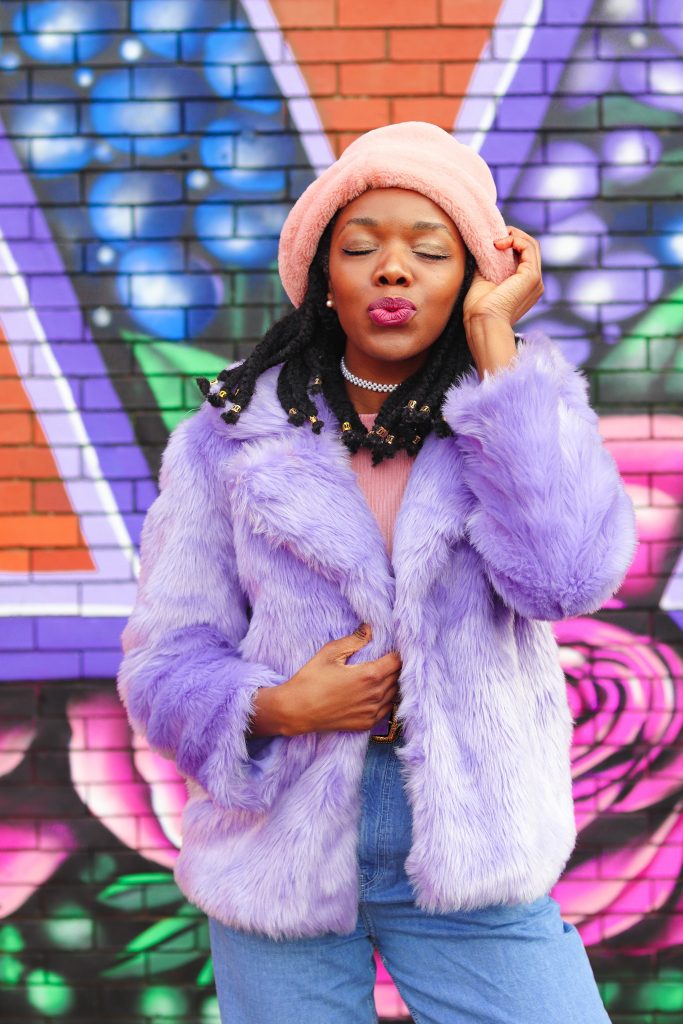 To wrap things up, I’d say faux fur isn’t 100% ethical, but it’s definitely more ethical than the current alternative. There’s simply no excuse fashion to be featuring real fur in 2020, especially when there are so many equally fabulous (but cruelty-free) alternatives available, but we could definitely do better on the environmental front. Can someone seriously look into creating biodegradable faux fur out of recycled fabrics? Your girl doesn’t wanna wear her stuff which means her furry friends are killed, but she definitely doesn’t wanna kill the planet either. K, thanks. 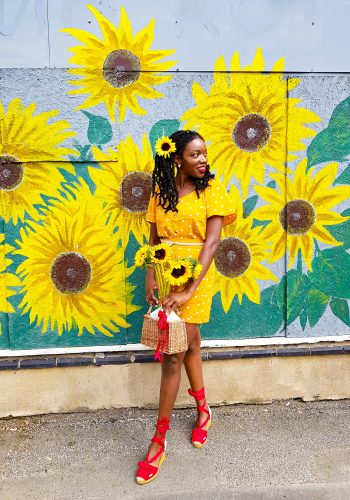 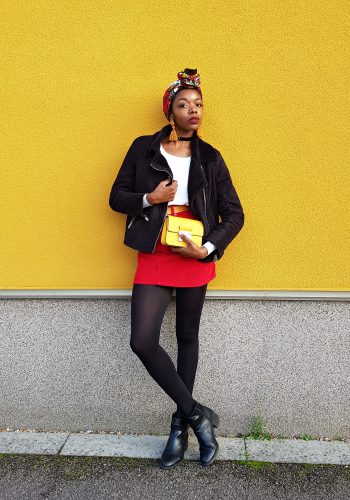 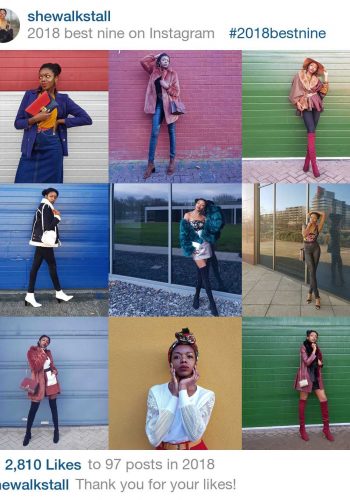 When you're you're in an online work meeting and t

Work from home, but make it 'fashun' (swipe for ou